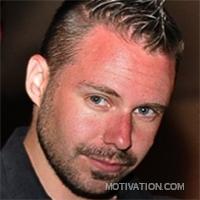 Profile: Over the last 20 years Luke Dancy has honed his skills as a creator, consultant and magician. From 2008-2013 Luke worked closely with Criss Angel on his hit TV series MINDFREAK on A&E and Criss Angel BeLIEve on Spike TV as a producer and creative consultant.   Through his work on national TV programs, speaking engagements and on camera appearances Luke Dancy has reached more than 100 million people in over 90 countries.    As a writer, producer, director and creative consultant he works both behind and in front of the camera.   As a magician he leverages his creative mind to help celebrities and major brands such as Criss Angel, Cirque du Soleil, A&E TV, Spike TV, Bud Light and countless others reach wider audiences with social media and experiential marketing.    Luke always brings a creative edge to every project that he’s involved in. Hard work, dedication and an eye for what works are all attributes that equal success.

Now hard work is an admirable thing but if you’re willing to take an ‘any means possible’ approach then you might be missing out on some amazing opportunities. More...

It's true that sometimes you're going to hit home-runs while other times you will strike out BUT as long as you gain knowledge then you've already succeeded. More...

Most of us are so motivated and quick to see what we're missing out on that we miss out on what's right in front of us! More...

Enjoy the Little Things, for One Day You May Look Back and Realize They Were the Big Things

Our day to day lives are filled with meaningful things that we often pass off because they seem small compared to what we expect to happen. More...

Motivation at Your Fingertips

Now when you’re having one of those days when you feel like you’re alone or that nobody cares all you need to do is connect to the goodness that is literally all around you all the time. More...

Sure, nothing is perfect but as long as you're always motivated and learning something on your journey then you're a step ahead of the rest. More...

Focus on You: A Better You Makes a Better World!

It seems like such a simple thing but let's be honest; aren't YOU worth 20 minutes a day?? More...